KfW becomes a major participant on the capital market

Originally the allies had wanted KfW to obtain its funds on the German capital market or from the bizonal budget. However, since this was completely unrealistic at that time, it was eventually decided that KfW would use counterpart funds from the Marshall Plan for refinancing purposes. This led to the emergence of the ERP Special Fund, from which KfW refinances a large share of its promotional programmes to this day.

KfW's first emissions are at the same time the first ever bonds issued on the German post-war capital market.

Until the mid-1980s, KfW's funding activities followed a fairly unspectacular trajectory. The only option at the time was "traditional" refinancing in Deutschmarks, mainly using ”Schuldscheine” (promissory notes). KfW then developed a first financial innovation – the medium-term fixed-rate note. These notes filled a market niche between the money market and the bond market. 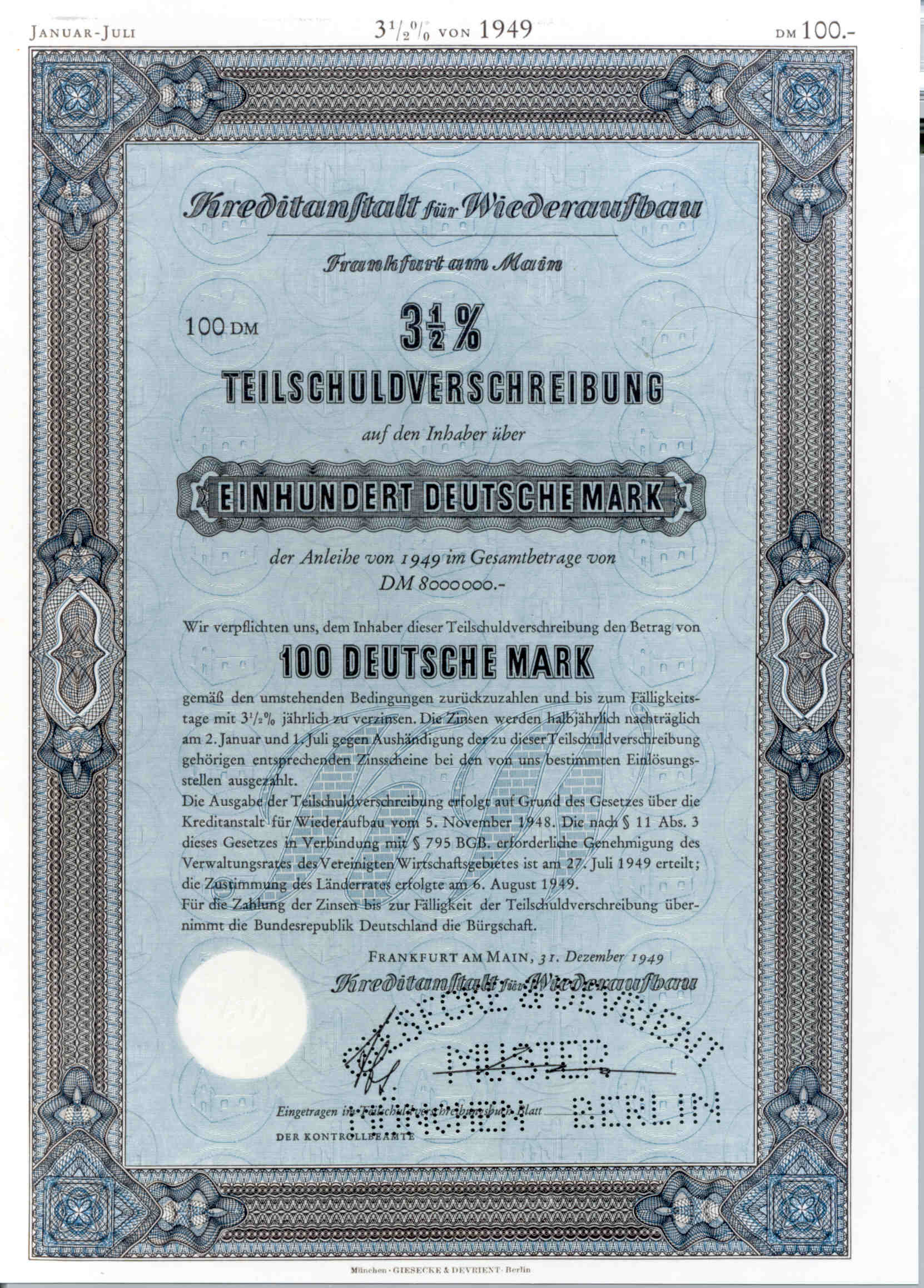 Internationalisation of the capital markets

The 1980s saw movement on the financial markets – the growing internationalisation of the capital markets opened up whole new refinancing options for KfW. The vigour of KfW's export and project financing business meant there were new levels of risk to be managed, especially currency risk. KfW used new instruments such as interest and currency swaps, and began to issue bonds in foreign currencies.

From 1985 onward other markets were opened to KfW such as the Yankee market in the USA, followed in the late 1990s by the Samurai market in Japan. For this to happen KfW had to be rated by the major rating agencies Moody's and S&P. The bank was one of the first German companies to submit to this process, and was the first to register with the US Securities and Exchange Commission (SEC) in 1987.

Since the turn of the millennium, KfW's refinancing activities have gathered more and more momentum. The integration of Deutsche Ausgleichsbank (DtA) alone, but also the continuous expansion of KfW's domestic and foreign economic promotion activities, have led to a doubling of the bank's funding volume within just a few years. Last but not least, Europe's monetary union created entirely new opportunities for KfW to operate as an issuer on the capital markets.

Today, KfW is considered one of the heavyweights on the international financial markets. Its refinancing activities are internationally oriented and serve a global circle of investors.

Until the mid-1960s KfW was annually raising some EUR 255 millions on the capital market, which it used largely for export financing. Once the bank launched its first permanent loan programme in the 1970s, its demand for refinancing funds grew. KfW's annual funding volume now amounts to around EUR 60 to 80 billion.