In the years since the wall came down, people in the former GDR have put in a huge amount of effort and achieved a great deal – some of it with the help of KfW Group. Since 1990, KfW has made more than EUR 194 billion (as August 2015) available in loans to support business start-ups, modernisation of the housing stock and rehabilitation of municipal infrastructure. Money well spent – because eastern Germany today once again boasts a healthy SME sector, attractive city centres and modern infrastructure.

From the Fall of the Berlin Wall to the German Unity

The former Federal Minister of Finance Theo Waigel, the former Federal President and State Secretary Horst Köhler, the historians Brendan Simms and Werner Plumpe as well as other contemporary witnesses recall the various aspects of a moving year. (9 November 2019) 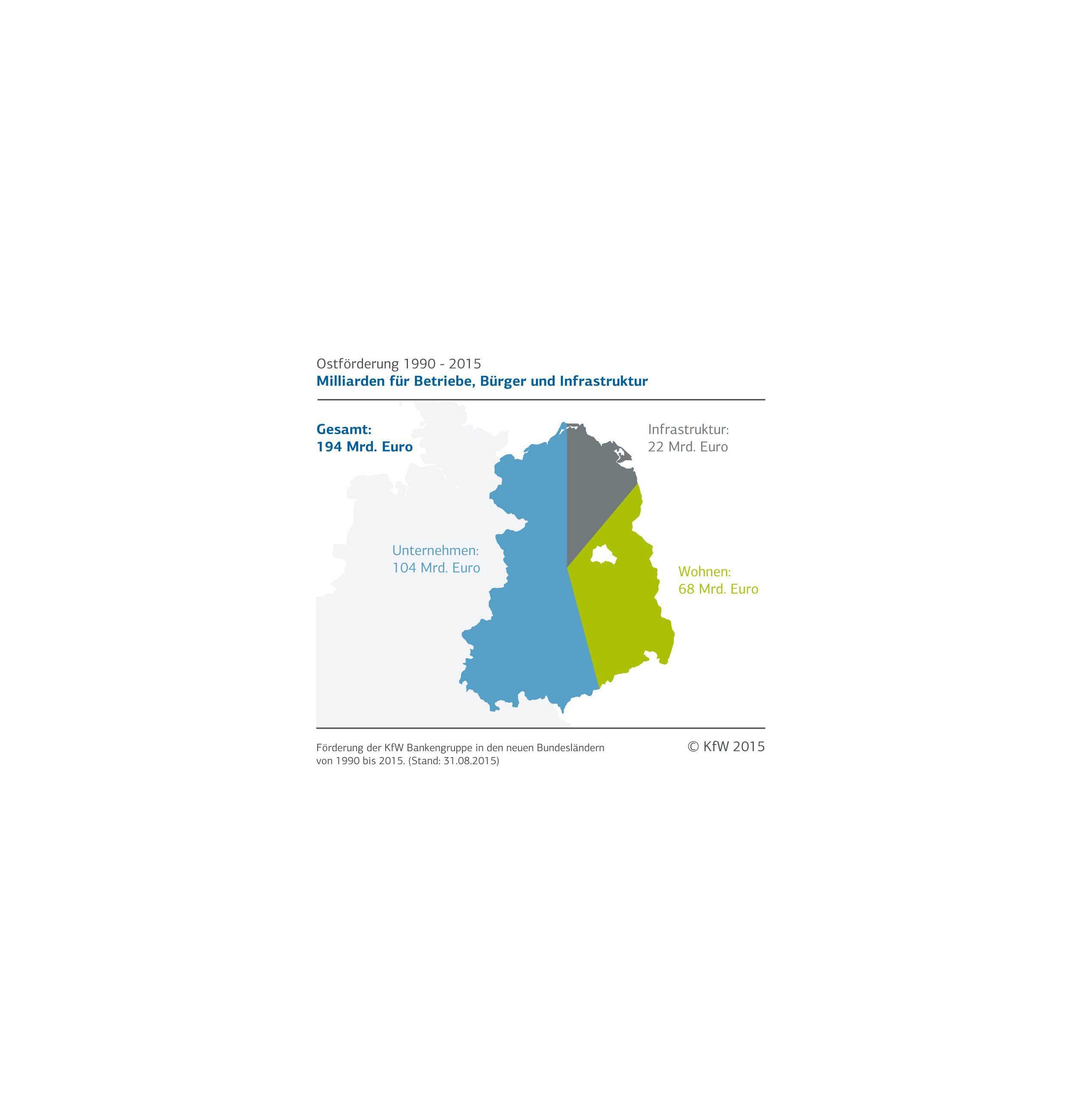 KfW involved from day one

On 9 November 1989 the wall comes down in Berlin. In Frankfurt, KfW starts thinking about how it can help bring two completely different economic systems together. Just one week later, on 16 November 1989, the first plans are laid.

A first it appeared that joint ventures involving West German companies and East German Kombinate (state combines) would be a suitable way of bringing the two economies closer together. By the turn of the year (1989/1990) KfW was receiving its first financing requests from East-West German joint ventures. However, once the foundations for German reunification were laid in the spring of 1990, the planned joint ventures became obsolete. KfW's promotion strategy then quickly took more shape.

EUR 126 billion for businesses and municipalities

In February 1990 KfW began supporting small businesses in the GDR through the ERP Special Fund's modernisation programme, and from July onward through its own SME programme. In June 1990 the KfW start-up programme also began helping former Kombinate (state combines) to finance their most urgently needed investments. At the same time the Deutsche Ausgleichsbank (DtA), which merged with KfW in 2003, promoted the establishment of SMEs. This financial support was very important – though professional advice was at least as important. This was why in March 1990 KfW set up its first advisory centre in the Hotel Metropol on Berlin's Friedrichstrasse. Since 1990, KfW has committed a total of 104 billion euros for the SME sector.

KfW's contribution was most apparent in the housing sector. In October 1990 KfW launched its housing modernisation programme, which very quickly proved to be superlative. In the years that followed the funding provided was continually increased. Initially it was mainly private homeowners who both invested much of their own time and effort, and made use of the low-cost KfW loans, to renovate their homes. Later on, measures to modernise prefabricated concrete buildings took off, once the problem of accumulated debt had been resolved. To date, KfW has made 68 billion euros available for the modernisation and renovation of homes. Using these funds, more than sixty-five percent of all homes in eastern Germany have been renovated.

Late successes of the Marshall Plan

These huge successes were also possible because KfW was able to base its promotional measures on existing, tried and tested programmes, as well as on significant funds from the US Marshall Plan. Whereas the Soviet Union banned Eastern Bloc countries from making use of financial assistance from the Marshall Plan, in West Germany these funds were disbursed as loans for reconstruction. The repayments received over the years were invested in ERP funds in the long term, meaning that they then became available for reconstruction projects in eastern Germany.

First loans from a hotel room: an interview with KfW Director Werner Genter on KfW, East German reconstruction and the scent of the GDR

The first two borrowers were Wolfgang Neustadt and Hans-Jürgen Hentzschel – whose construction company remains a success to this day.

In the early 1990s, per capita earnings in eastern Germany were less than half of those in the western states. No doubt about it, a new SME sector had to be established in order to get the economy back on track. KfW was part of this effort from day one.

Hardly had the wall come down when KfW's economists began thinking about how to bring the economies of the two Germanys closer together. Joint ventures involving West German companies and East German Kombinate (state combines) initially seemed to be a good idea, and the first financing enquiries reached KfW around the turn of the year (1989/90). But the rapid political developments soon made these joint ventures obsolete. Almost all of them had been based on the assumption that two German states would continue to exist as part of two separate economic blocs. The elections in the Volkskammer (People's Chamber) of the GDR in the spring of 1990 laid the foundations for its accession to the Federal Republic of Germany.

The backbone of a market economy

KfW's promotional activities now started taking shape very quickly. Right from the start it was clear that a strong SME sector - the backbone of a healthy market economy – would be key to the reconstruction of eastern Germany. Conditions did not appear especially favourable, as East Germany's SME sector had been systematically destroyed in the 1970s, if not before. So it is all the more gratifying to see how enthusiastically and with what initiative many East Germans have embraced the adventure of entrepreneurship and market economics, and ultimately made it a real success story.

KfW started helping small businesses in East Germany as early as February 1990, first via the ERP modernisation programme, then through its own SME programme.

Nonetheless, brisk progress was made in establishing an SME sector in the new federal states. While the Deutsche Ausgleichsbank focused on promoting the establishment of new SMEs, KfW supported the modernisation of existing ones. The key instrument used was the ERP reconstruction programme. All in all, KfW has made around EUR 104 billion available to commercial enterprises in the new federal states, including Berlin, since 1990.

Renovation boom in the east

.. and after renovation – Thanks to low-interest KfW loans a great deal of old housing stock has been saved and the housing standard raised considerably. (photo: KfW photo archive)

The picture in many cities in East Germany was similar: historical city centres falling into disrepair from top to bottom, with people living in prefabricated concrete buildings on the outskirts, which became no less dilapidated as the years went by. Soon after reunification KfW launched low-interest loan programmes, finally giving people an opportunity to improve their living conditions and save historical buildings. Within the space of just a few years, one in two homes in eastern Germany had been renovated using KfW funds.

In 1990 KfW launched its home modernisation programme for the new federal states. Initially limited to EUR 5.1 billion, this figure was soon increased significantly. In just a short space of time the KfW-financed investments made the homes of many millions of people more comfortable, making a key contribution to improving their standard of living. The programme also had a positive effect on the newly emerged SME sector. Many businesses had full order books, and therefore secure jobs, for years to come. And the environment too profited from these modernisation measures in the housing sector. This is because in almost all cases improved heat insulation and more modern heating technology was used, thus saving energy.

Initially it was mainly private homeowners who took advantage of the low-interest loans from the KfW programme. Owner-occupiers in eastern Germany were at last able to renovate and beautify their homes. Places then soon started to look different, as more and more attractively decorated and spruced up buildings began to stand out from the grey rows. From 1993 onward the modernisation of prefabricated concrete buildings also received a considerable boost, as ownership issues and the accumulated debt problem were cleared up.

Since the fall of the Berlin Wall and German Reunification EUR 68 billion has been injected into modernising the housing stock. KfW still finances the renovation and modernisation of homes today. The tasks have changed somewhat, though. Maintenance is now no longer the chief concern. Today the focus is on the energy-efficient renovation of homes in eastern and western Germany. KfW's track record after almost three decades: through low-interest loans, the bank has financed the modernisation of more than 65% of the seven million homes that existed in East Germany when the Berlin wall came down.

The air in eastern Germany has improved considerably thanks to almostthree decades of investment in waste management, energy saving, hydraulic engineering, noise control and air pollution control. After the wall came down, the German government tasked KfW to provide low-interest loans to kick infrastructure improvement measures swiftly into gear. Today, infrastructure in eastern Germany is functional again, and in many cases is much more modern than in the west of the country – a perfect foundation for continued development.

When the Berlin Wall came down, infrastructure in the GDR was in a dilapidated state. The rivers were so heavily polluted that only twenty percent could be used for obtaining potable water using normal treatment technologies. Only just under 58 percent of households were connected to a sewage treatment plant at all. And industrial plants too would often discharge their waste water into the rivers untreated. Air pollution was also acute. The GDR was Europe's top emitter of sulphur dioxide per unit area.

The ERP environmental credit programmes were launched in the new federal states as early as February 1990, and were later followed by KfW's environmental protection programmes. In September 1990 the German government finally unveiled its EUR 5.1 billion municipal credit programme, whereupon it mandated KfW and Deutsche Ausgleichsbank (which merged with KfW in 2003) to promote municipal investment through low-interest loans.

Since then, KfW has extended a total of EUR 22 billion for infrastructure. The results can be smelled and tasted every day in the new federal states. Air pollution has been cut very significantly, with heavy metal emissions already declining by up to ninety percent in the first ten years. The heavy contamination of rivers by waste water has also been dramatically reduced. Around 90 percent of households are now connected to sewage treatment plants.