A boost from the USA

5 June 1947 is considered the birth of the Marshall Plan. Almost 75 years ago, the US Secretary of State George C. Marshall announced the "European Recovery Program" (ERP) in a speech at Harvard University. The reconstruction programme was supposed to promise a rapid economic upswing for war-torn Europe.

The American Congress approved a total volume of 12.4 billion US dollars for the ERP with an initial term of three and a half years. In addition to rebuilding the European economy, the aim of the ERP was to contain communism and create a sales market for American overproduction.

The American statesman George C. Marshall (* 1880 +1959) became the namesake to the unprecedented plan for economic reconstruction in Europe two years after the end of the World War II. Since 2012, a bust of the Nobel Peace Prize laureate has been held at KfW in Frankfurt.

The Americans made their support conditional on the European states agreeing on a common economic order. As early as July 1947, 16 countries agreed on this at the Marshall Plan Conference - and thus took a first step towards European integration.

The ERP was finally launched in autumn 1948. The USA supplied the participating countries with all kinds of goods - raw materials, food and material goods. However, these were by no means gifts: the countries had to pay the equivalent value of the imports into so-called counterpart funds. The funds invested here did not flow back to the USA, but were henceforth available to the European economy as new capital. They thus formed the basis for the so-called ERP Special Fund. In order to pass this on, the USA and Great Britain suggested the foundation of a "Reconstruction Loan Corporation".

In November 1948, the Economic Council in West Germany passed the "Law concerning KfW", thus laying the foundation for sustainable and successful economic promotion in Germany. The promotional bank, which was founded when the law came into force on 18 November 1948, began operations in Frankfurt shortly afterwards under its then name "Kreditanstalt für Wiederaufbau". By channelling aid money from the Allies under the Marshall Plan, it played a key role in supporting the reconstruction of war-ravaged Germany.

The "external" and the "internal" Marshall Plan

But how did the Marshall Plan work? The Allies wanted to strongly stimulate the reconstruction of Europe by supplying billions in food, raw materials and material goods. This "external" Marshall Plan was accompanied by an "internal" Marshall Plan, which made sustainable success possible in the first place. For the supplies did not represent gifts, but had to be paid for. The purchase price payments for these imports were to be used as so-called "counterpart funds" for investments through KfW.

Initially, it took some time before the first counterpart funds were accumulated through corresponding imports financed through the external Marshall Plan. At the end of 1949 the first funds flowed to KfW, so that at the beginning of 1950 the internal Marshall Plan, i.e. investment financing by KfW from these counterpart funds, could begin. By the end of 1953 KfW had received around EUR 1.89 billion in several tranches for initial lending to the German economy.

The ERP Special Fund as a revolving fund

In 1953, the Marshall Plan expired. However, the London Debt Agreement stipulated that Germany had to repay only just under 1 billion US dollars of the funds received. Since the federal government made the repayment to the Americans from the federal budget, the ERP Special Fund (ERP-SV), which was created from the counterpart funds, was not diminished. The ERP-SV was now shaped by law into a revolving fund for long-term investment loans. These were to be used for the promotion and reconstruction of the German economy: This was the end of aid - self-help began!

Through the interest income, the special fund grew strongly over the decades. Various support programmes, whether for structural development, promotion of small and medium-sized enterprises or environmental protection, were and still are financed through these funds. From 1990 onwards, the well-tried Marshall Plan funds also flowed into the new federal states. Decades later, they also benefited the part of Germany that was denied participation in the Marshall Plan by the Soviet occupying power after the war.

Reorganisation of the ERP Special Fund

KfW treasures its past. All archive materials are housed in the Historical Group Archive in Berlin.

"Financing the future. KfW - the German Bank with a Public Mission" by Heinrich Harries, Frankfurt am Main 1998. 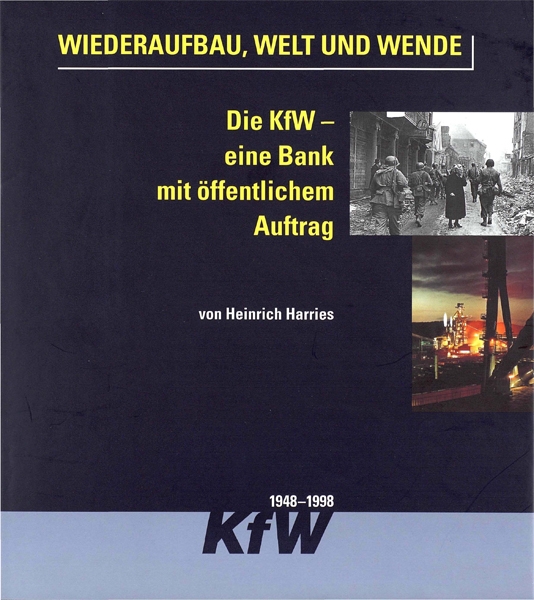 KfW at a Glance